Poppleton Road forms part of the A59 from York to Harrogate, some two miles from the city centre. The coming of the railway in the 19th century, gradually transformed its rural nature into a suburban one. The inbound side became operational railway land, with freight sidings and the extensive carriage building and repair workshops. Terraced housing sprung up along both sides and in newly-formed neighbouring streets.

At the end of World War II, the area had lost its share of menfolk, kille 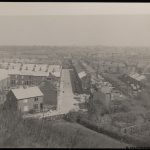 d whilst on active service. The area had been badly bombed during the Baedecker raid on York – one of a series of attacks ordered by Adolf Hitler upon historic English cities, selected from the German’s Baedecker tourist guide. Raiders aiming their bombs at the nearby railway line missed this principal target. Instead, one bomb landed on Poppleton Road primary school, which was mercifully empty. Nearby streets took three hits, with whole families wiped out in an instant. One bomb landed in an open reservoir, atop an artificial hill which still overlooks the area. The ensuing hole still remains, as one of the last bomb craters in York. Click the photo opposite to enlarge it. Bomb damage viewed from the hill overlooking Chatsworth Terrace towards Poppleton Road

The local Chief ARP Warden was Mr. AIf Hudson, a boot and shoe repairer of 99 Poppleton Road. When peace descended in 1945, AIf and his former Assistant Wardens organised a series of Victory street parties in the locale.

AIf conceived the idea of a permanent memorial to the area’s war casualties. Not just a plaque or a monument, but a living testament to the fortitude of local residents. He called a public meeting at Poppleton Road school, which resolved to build a Community Hall for social and recreational activity.

Building materials were short, with priority being given to repairing damaged houses. But with some perseverance, AIf and his helpers secured the rental of a plot of land just off Poppleton Road, overlooking the railway. A former barrack hut was purchased from RAF Everingham, a village bomber base west of York, dismantled on site and transported flat pack style to Poppleton Road.

Volunteers, many of them carriageworks employees gave their varied skills to rebuild the hut, and fit it out. Permission was obtained to demolish the old air raid shelter on Poppleton Road. All its bricks were hand cleaned and reused to form the footings of the Hall, which was finally opened on Sunday November 24th 1946. At centre stage was a mahogany plaque, which bore in gold leaf, the names of the deceased in whose memory the Hall had been founded. A Committee of residents continued to manage the Hall, as they still do today.

By the mid 1980s, it was evident that the old wooden building, by then expanded, was at the end of its life. A six year fund-raising campaign followed, with all the Hall users contributing in various ways to collect over £40,000 towards the estimated £125,000 cost. The balance was secured with grants from Local Authorities, businesses and grant-making trusts. Charitable status was obtained, plus Planning Consent for the new building. The freehold of the still-rented site was bought on very favourable terms, after York’s MP had a word in high places. The Committee rented temporary premises at nearby Poppleton Road school for eighteen months, In that time, the old Hall was demolished, and the new building began to take shape.

The New Hall opening ceremony was held in April 1990, as a re-enactment of the original 1946 proceedings. Committee President Roy Hudson, nephew of the Hall’s late founder AIf Hudson, played the central role. The then Lord Mayor of York, ClIr. Jack Archer and his wife Ena, the Lady Mayoress were in attendance. Jack was appropriately the Hall Committee’s Vice President and a retired Carriageworks employee. 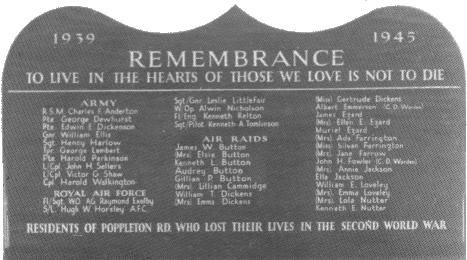 The Memorial Plaque was beautifully restored by courtesy of York Civic Trust whose Chairman, Dr. John Shannon, unveiled it as part of the proceedings.The new Hall was occupied from the following month, and continues to provide a home for the regular meetings of a variety of local groups. It also hosts one-off private bookings for meetings, parties and similar events. The Hall today is equipped with AV facilities, wifi and broadband.

In 2007 , former Luftwaffe crew member 86 year old Willi Schludecker came to York on the latest of a series of reparation visits. He had been part of the bomber raid on York. Together with his UK hosts, Willi visited the Hall. He was given a copy of the Hall’s history book, published in 1990, and gave a donation to the Hall in return. Willi died in 2010, in his home City of Cologne.

A programme of future improvements is planned to make the building more maintenance-free. This will be funded by a mixture of the Hall’s own reserves, plus external capital grants where these can be secured. Poppleton Road Memorial Hall’s continued role in the 21st century seems well assured.

For Local History researchers and Geneaolgists, our early records are now deposited with York City Archives.